MullenLowe – Sri Lanka recently launched its sister agency LoweLintas which will now come under the MullenLowe Group – Sri Lanka. Both entities hail from the same bloodline in brand communications – Lintas. Lintas is a global creative powerhouse which counts 120 years in advertising and has been operating under the name Lowe Worldwide since the year 2000. It then assumed the new name MullenLowe in 2015 following a merger with the US network Mullen. Consequent to this merger, the Sri Lankan operations too joined the more than 90 other offices in 65 countries to adopt this name and identity.

In just four years, MullenLowe Sri Lanka assumed group status incorporating LoweLintas as its sister agency. The two will operate independent to each other. In addition to these verticals, the MullenLowe group relaunched its brand activation and public relations arms as LoweActive and LowePublic respectively. It also formalised its specialist digital arm as an expert offering with the launch of LoweDigital.

The new agency and all its verticals will operate from its smartly furbished premises at No. 3 1/1, Austin Place, Colombo 8 while MullenLowe will continue to operate from No. 125, Kynsey Road, Colombo 7.

Commenting on the formation of the MullenLowe Group – Sri Lanka and its five independent verticals, Thayalan Bartlett, Chief Executive Officer, MullenLowe Group Sri Lanka said, “There is no better time to boldly invest in our beliefs than when the economy is not at its best. This is our small contribution to bring about optimism with purpose for Sri Lanka and our clients. In conditions such as these, marketers want their brands to be brave and we have been an agency known to respond to this call. We have upped our offering by Hyperbundling our areas of expertise to meet the challenges of our times. 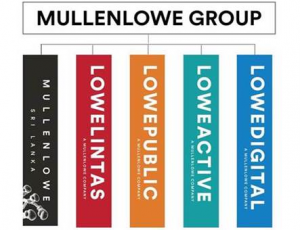 MullenLowe Sri Lanka has been crowned the most effective agency of the year at the Effie Awards Sri Lanka for the past 2 years in a row and is the reigning gold award winner at Campaign Asia Magazine Creative Agency of the Year (Rest of South Asia category). In a recent interview Virat Tandon, Group CEO, MullenLowe Lintas Group – India praised the agency claiming it to be one of the best performing offices across its South Asia network. These accolades are backed by an impressive business performance with the company continuing to dominate 80% of the top 10 advertised categories and 50% of the top 20 advertised categories for three consecutive years making it the single largest creative agency in the country. The company doubled its revenue in four years, largely fueled by new business wins. New business for 2019 has clocked a healthy contribution to revenue at 18% with 2019 slated to be its best year ever. The company is expected to grow by 29% over 2018 and 7% over its budgeted revenue for this year. All this despite 3% of its total revenue getting wiped-off following the events of 21/4.

Bartlett attributes the success of MullenLowe to the defiant spirit of the team that helped the company rebound fast from the adverse effects of the April incidents. In hindsight the terribly unfortunate events also brought out the best in us as a team and he recalls the agency’s new business team taking-on a new brief a day after 21/4. It was deserted streets and eerily quiet offices that was the setting for a new client’s brief that eventually turned good for the company.

“We knew we had to do our bit to overcome a seemingly hopeless situation during what was a severely challenging and emotional time for all of us. If we hope to turn around business we could not afford to get distracted by terrorists who had left the economy in a disastrous situation. When an economy is down the private sector is more agile and better placed to respond than the public sector. We want to bravely support this by setting flight to enterprise with the formation of the MullenLowe Group in troubled times, which we feel is a timely decision as we stand poised for an economic revival in 2020,” Bartlett concluded.